The parish church of Marone directly overlooks the lake and is preceded by a large churchyard that once descended towards the shore. Dedicated to San Martino, it became a parish church between 1532 and 1572, the previous main church was the one dedicated to San Pietro Apostolo in Pregasso.

When Carlo Borromeo visited Marone in 1580, the village counted on786 inhabitants. However he had found the parish “so small that it could not contain all the people” and, by a decree of 1581, he ordered the construction of a new and larger on.

Amigoni’s painting, the Virgin with Child and Saints Rocco and Sebastiano, of 1643, the north-south oriented exhibition, placed on the current churchyard and separated from the lake by the cemetery only partially enclosed by wall and, after 1862, closed by gates. The church was a single room with a gable roof that in 1567 was not yet completed, as did the confessional and the baptistery in stone (all works that, with others, will be concluded only after the visit of Borromeo).
Until 1580 it had no front access portal but only two side entrances.

The church had three altars, the main altar, the one of the Scuola del SS. Sacramento (also dedicated to St. Bernardino of Siena) and that of the Rosary.

On 27 June 1698 the community decides to purchase the neighbouring building . A few years later it seemed that the idea of ​​a new factory was abandoned, so that on March 20, 1706, permission was requested to restore and expand the old church of San Martino, which was granted with Ducale on 11th July by the Doge of Venice, Alvise Mocenigo.

Instead, they returned to the idea of ​​the new church, when a garden owned by Lorenzo Ghitti, son of Antonio’s and cousin of the priest, Don Bartolomeo, was purchased in 1708.

The façade, on two registers, with a multilinear crowning and the central protruding part, is marked by pilasters resting on bases. The large semi-curved portal houses a large coat of arms; particularly elaborate are the frames of the central window and the four recesses. The front was completed in the years 1927/1928 with the statues of Saints Anthony Abbot, Carlo Borromeo, Martino and Pantaleone, artworks by the sculptors Luigi Mainetti and Severo Trotta di Marone. The fresco in the lunette by Vittorio Trainini, of which few traces remain, dates back to the same dates.

The current bell tower (1877) replaces an one, demolished because at the end of the works of the eighteenth-century building it was lower than the façade.

The exterior is rather simple, even if it is characterized by a multilinear articulation in the upper band of the sides, which highlights the internal scanning of the chapels.

It corresponds to an interior part with a single hall, with a barrel vault, six altars, eight recesses containing statues of the Fathers of the Church, and a semi-circular apse. The decoration has been realized in different periods: the stuccoes are mostly from the mid-eighteenth century and the altars date back from the seventeenth century (marble altar with spiral columns of the chapel of St. Anthony) to the end of the eighteenth century (in scagliola, the Virgin of sculptor Martino Pasquelli di Pellio, 1798; the Mysteries of the Rosary are attributed to Sante Cattaneo), to the nineteenth century; some were renovated in 1941.

The frescoes of the vault, of the holy arch and of the presbytery were made in 1740 by Domenico Voltolini and his collaborators. They illustrate, within valuable white and golden stuccoes: Saint Martin in glory, Episodes from the life of Saint Martin, the Annunciation, the Adoration of the Magi, the Lamentation over the Dead Christ, the Assumption, the Eliodoro’s Expulsion, and Angels carrying frontlets and various symbols.

Voltolini made also the altarpieces of the Holy Family with Saints Anthony of Padua and Ignatius of Loyola, of the Extension of the Cross with saints, martyrs and angels and the small frescoes in stuccoed frames at the entrance to the chapels and many of them have been repainted. The large and modest fresco with the Crucifixion on the counter-façade is on the other hand still from the 18th century. In the apse, the dazzling altarpiece with the Immaculate and the saints Martino, Pantaleone, Carlo Borromeo and Antonio Abate, within a gilded stucco framing (Giovanni Battista Locatelli, 1800-1802) and perhaps partially retouched, was rightly assigned to one of the most interesting 18th century painters from Brescia: Giuseppe Tortelli from Chiari.

The marble altar of the main chapel is among the most important works of the sculptor from Brescia Antonio Calegari and includes the medallion with the Sacrifice of Isaac (signed and dated 1742), two praying Angels and the two Saints on the sides of the tabernacle. 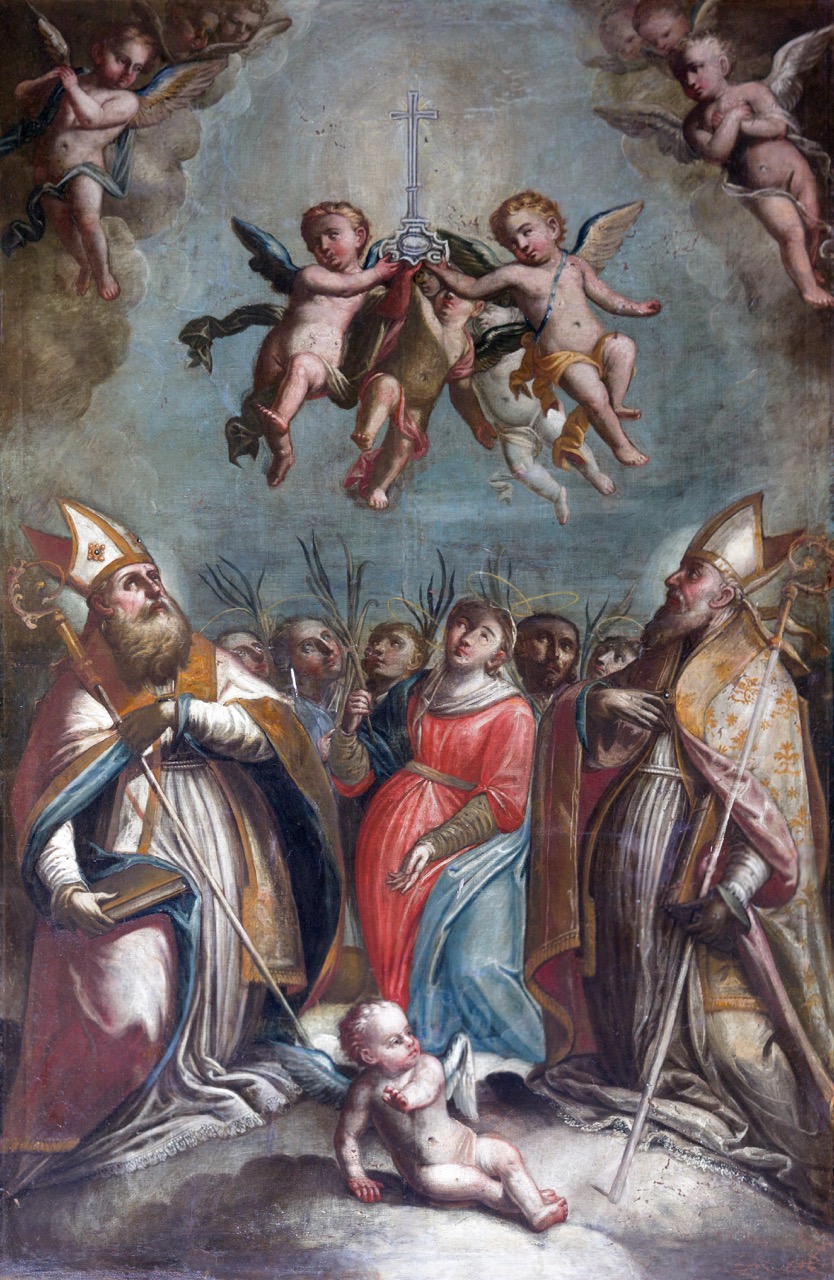 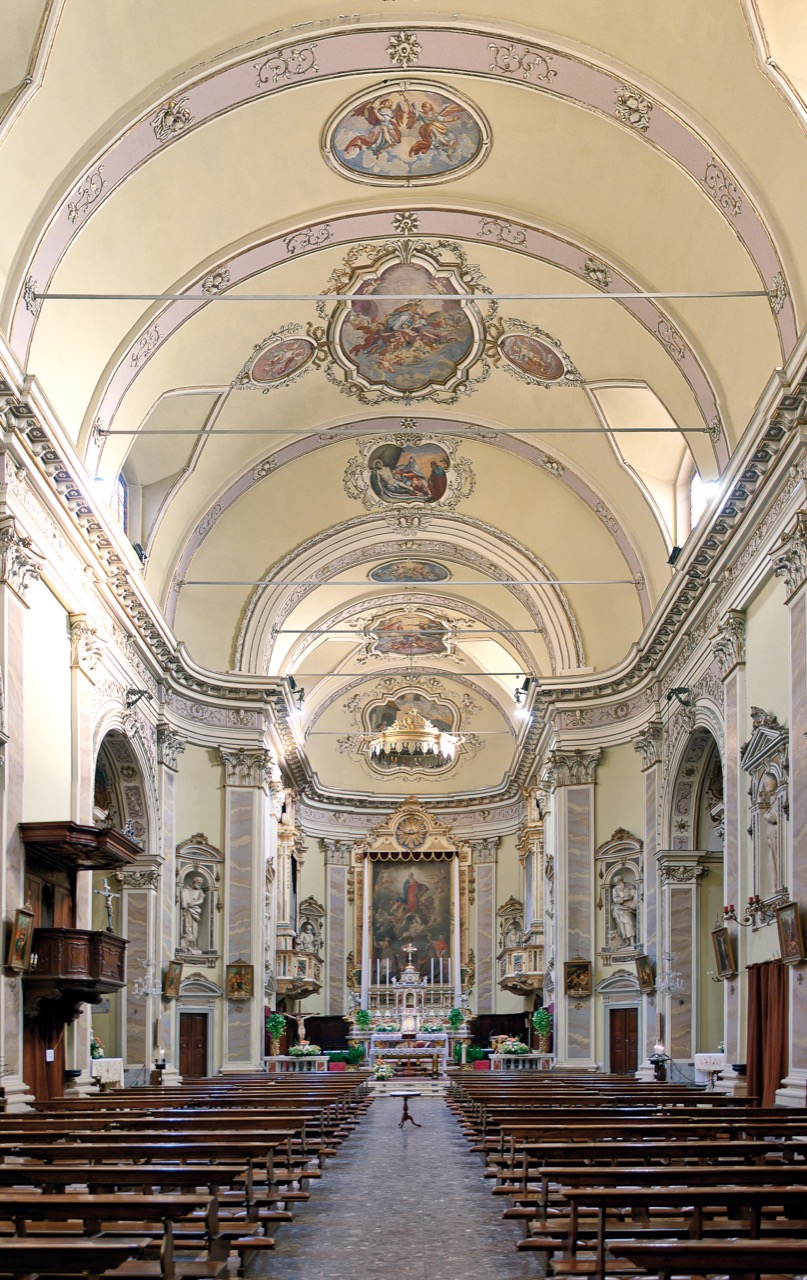 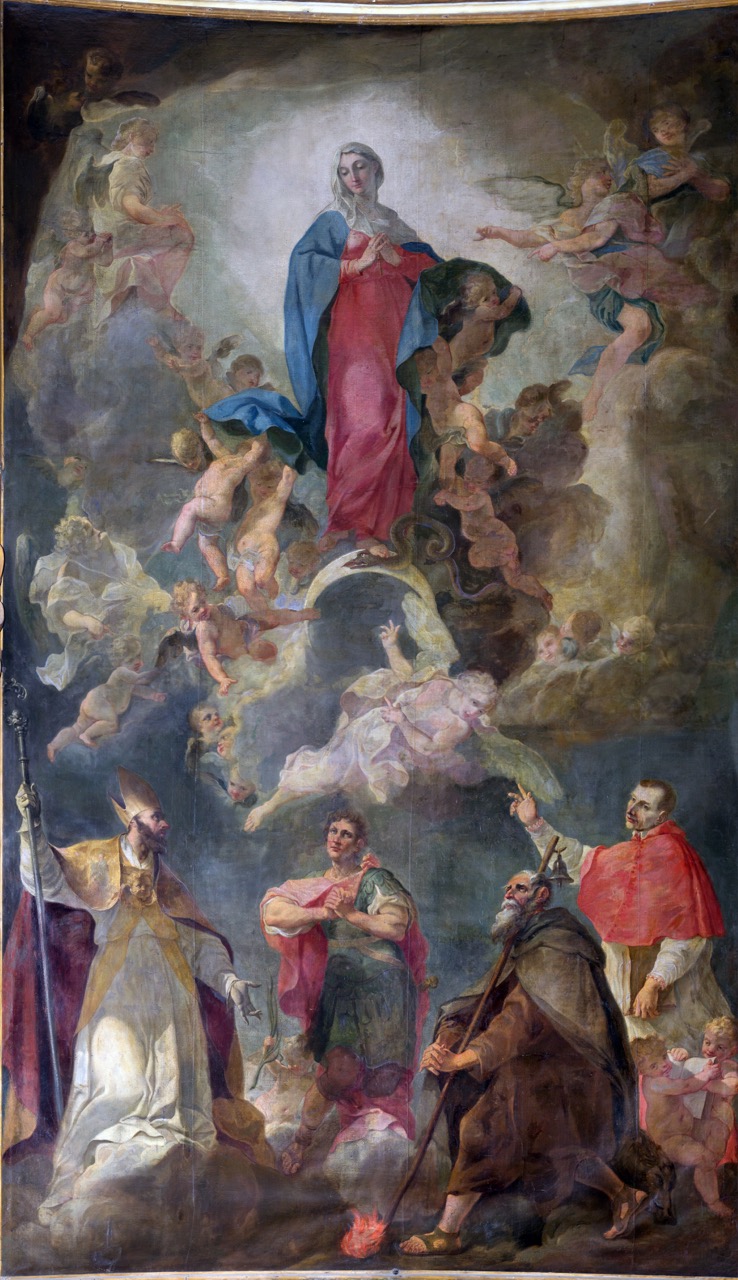 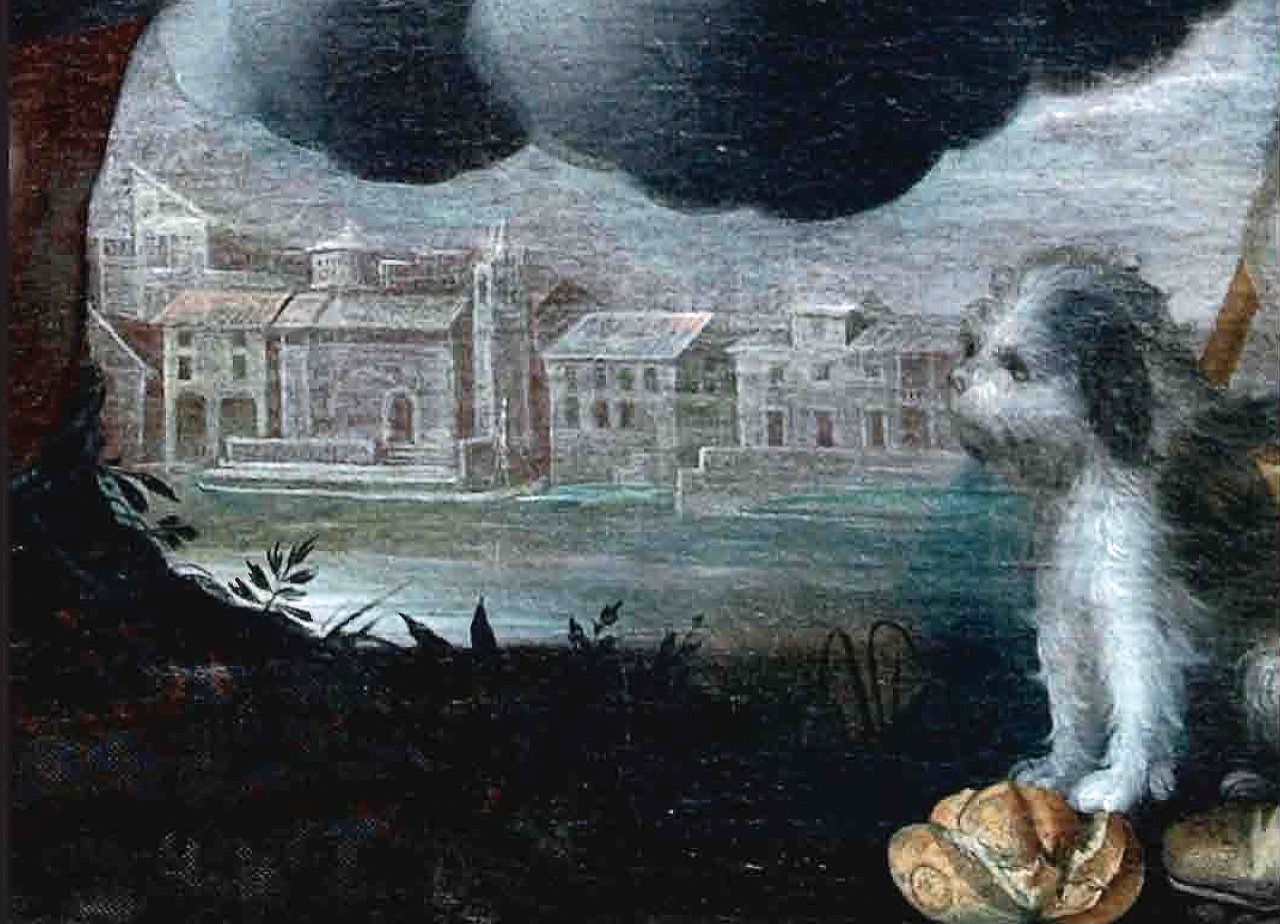 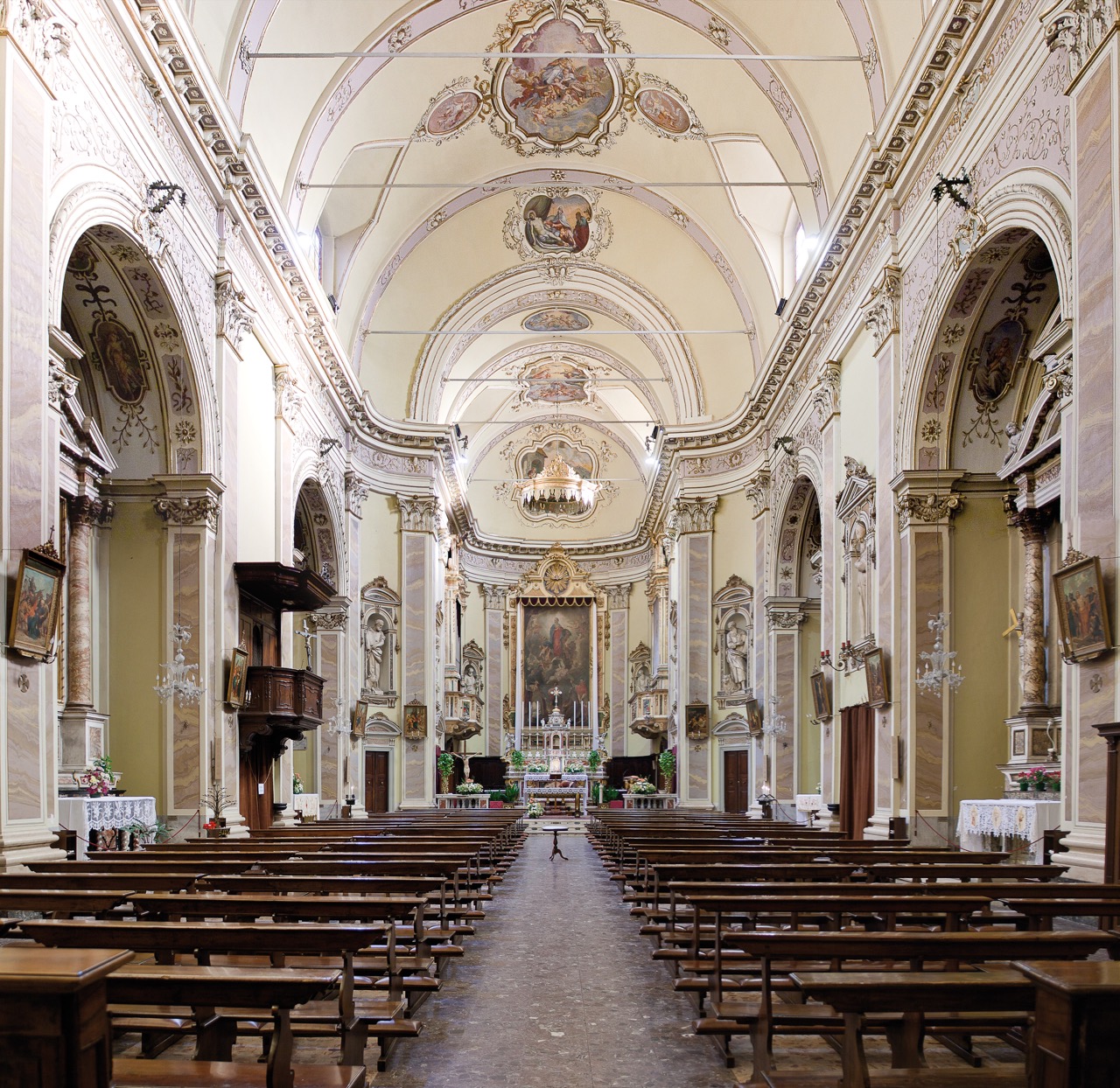 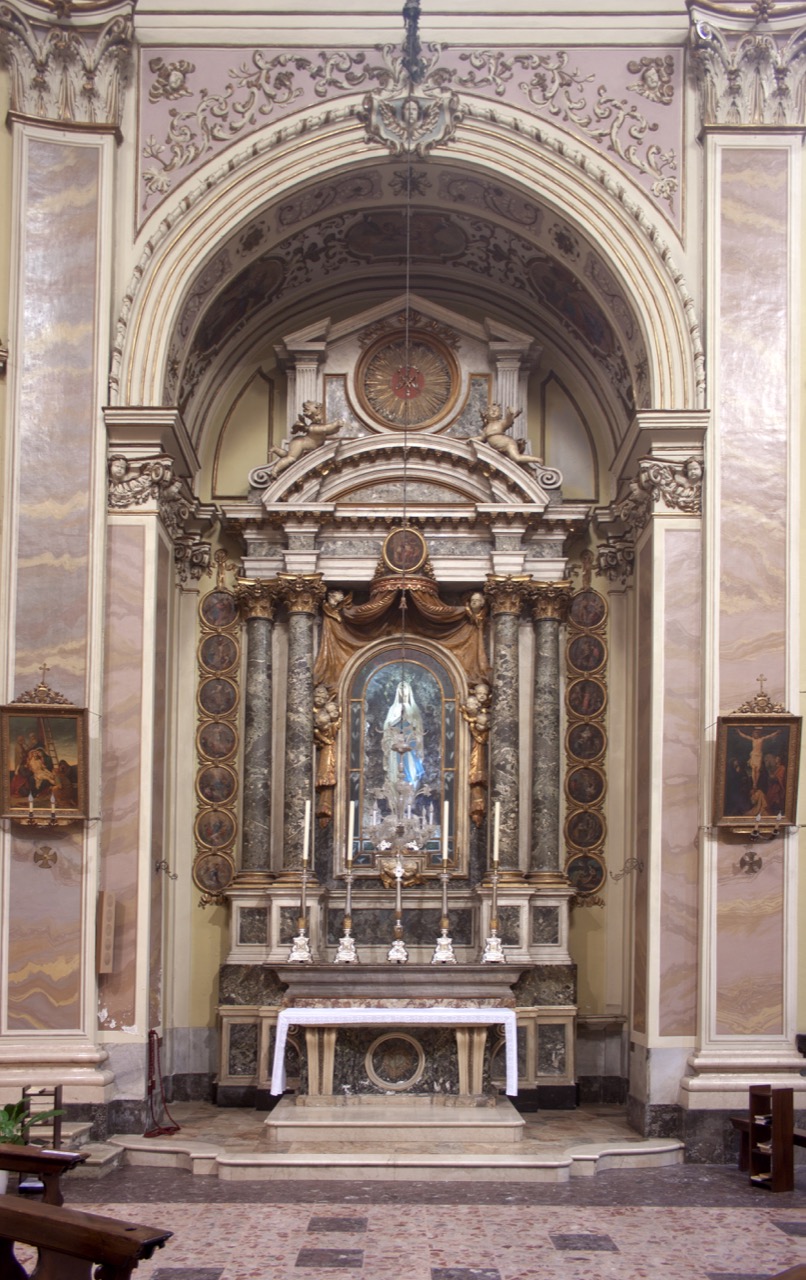 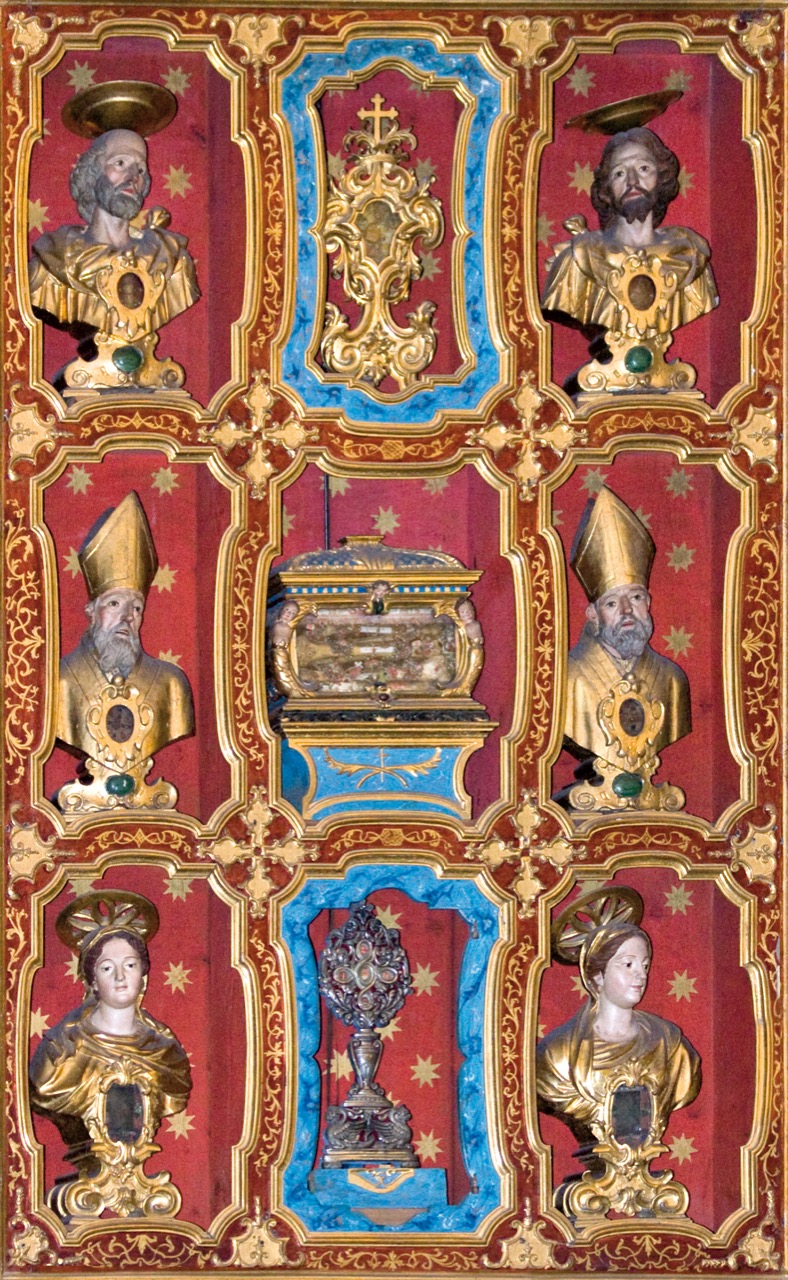 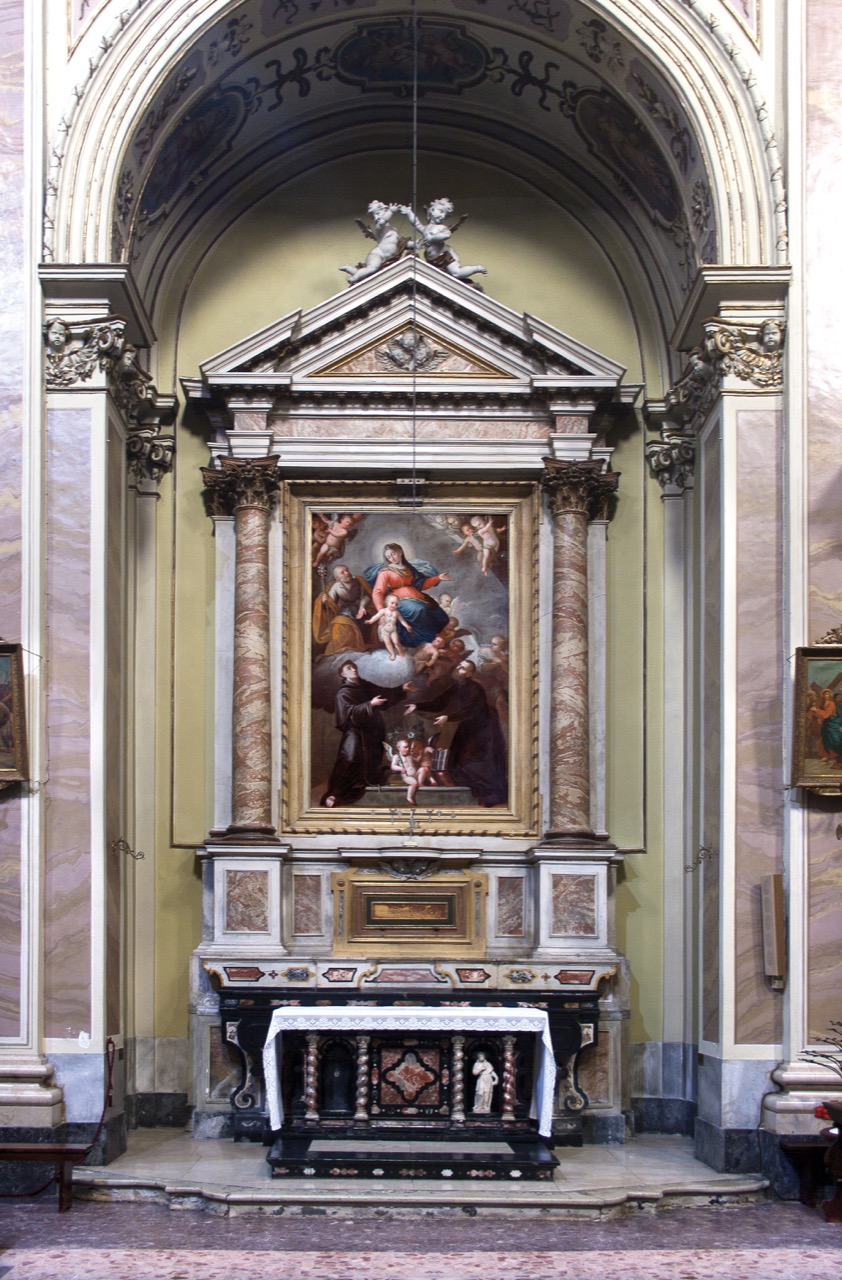 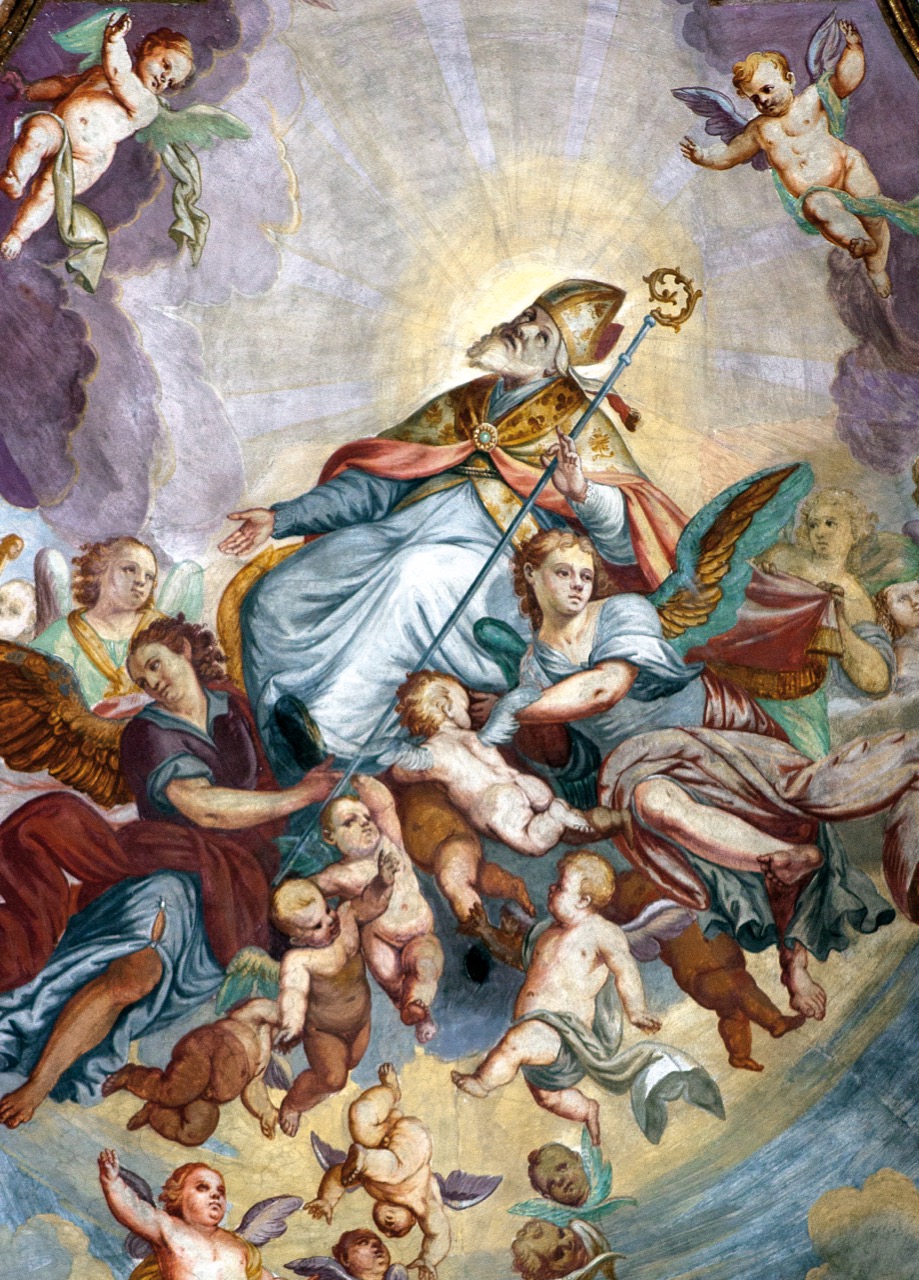 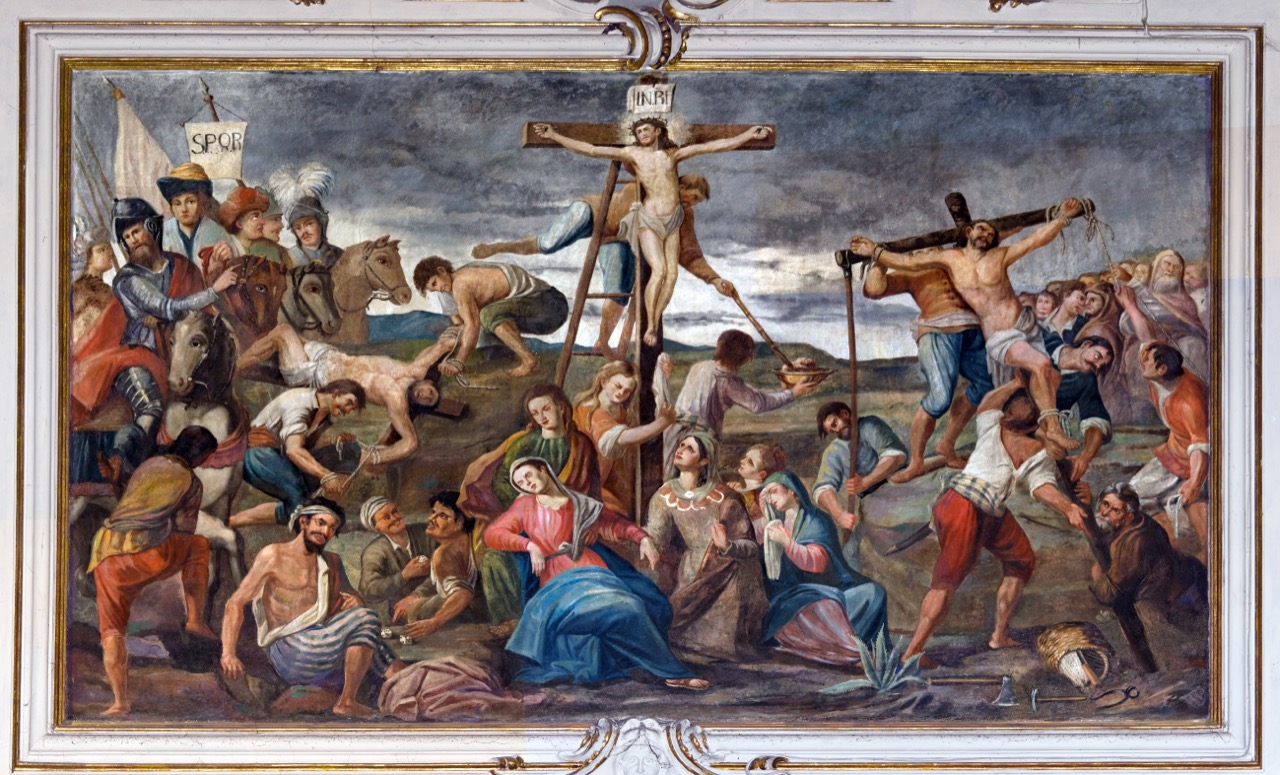 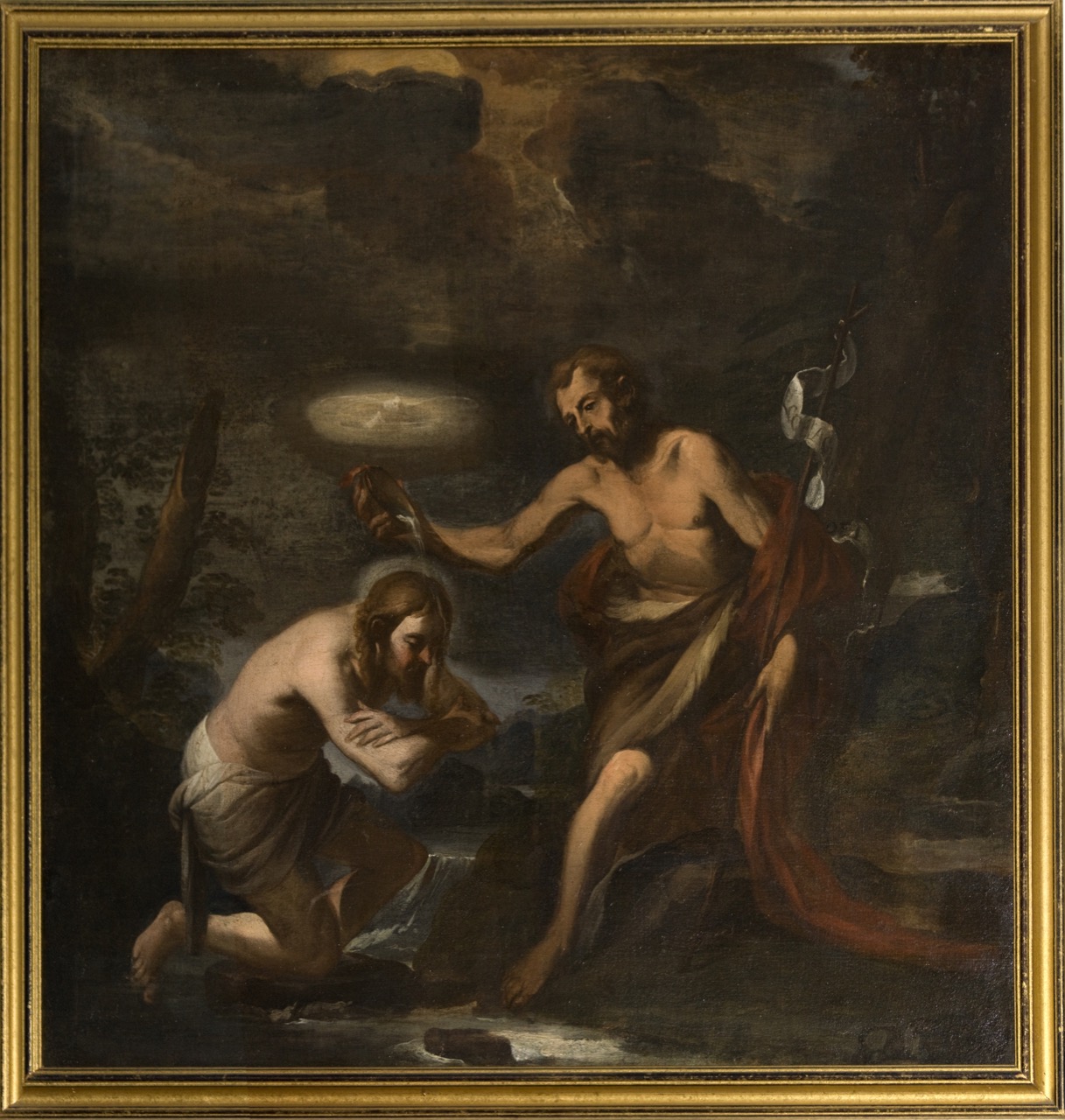